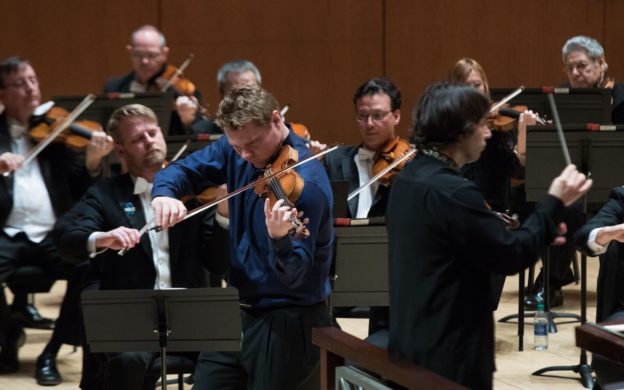 The review of the concert was brilliant and the audience reception was overwhelming. David has really been pushed to the chest of the thousands of concert-goers he has served as concertmaster of the Atlanta Symphony Orcehestra during his nine years. Gresham goes on to write: “Conus Violin Concerto gift ASO’s concert master, David Coucheron, plenty to showcase in terms of both technique and musical expression, with its richly romantic solo part that was able to sing over (and in-between) a generally fulsome orchestral texture. The 19 minute concerto’s three sections were played without a break. A robust 55 bar introduction by the orchestra preceded the entry of Coucheron’s solo part in a brief recitative that led into a singing theme in the violin over pianissimo chords. The work then wends its way through alternating passages of singing melody and technical prowess for the violin before reaching the climatic 55 bar written out cadenza. Coucheron returned to the stage for an encore that he gratiously chared with his college, principal second violinist Julianne Lee. The played an unaccompanied duet that threatened to outshine the Conus Concert itself: The Concert Caprice on Norwegian Melodies by Johan Halvorsen, a Norwegian composer whose life was contemporaneous with that of Conus.”

Full hall and Standing Applause! As one of David’s former colleagues spontaneously put it: “He Nailed It!”